Robert Chapman
3521 reviews
738 meals
I didn’t travel to Vilnius expecting amazing food. In fact this was a trip where restaurant research happened after flight bookings and Lithuania doesn’t have a reputation for its food and is off the Michelin radar. However my research suggested that the best place to try would be Nineteen18 (named after Lithuania’s year of independence), both because of the reputation of the chef and also due to his time spent at the legendary Noma in Copenhagen. It’s a surprise menu so I can’t say I knew exactly what to expect, though creativity, farm-to-table, local ingredients and some fermentation would surely be a part of it. The restaurant is in the middle of the Old Town in the well-known Hotel Pacai though it is very discreetly signposted. The initial welcome is something that I wish would have some influence on other restaurants. guests are taken into the kitchen and introduced to all the chefs. This is a really nice touch, for the guests and for the chefs, and is also a sign of the really positive culture that head chef Matas has created. It comes across in the service all the way through and felt like an ideal restaurant environment to work in - it certainly was a pleasure to be a diner. It didn’t take long to realise that the meal would be truly special. This is Noma-level technique applied to Lithuanian ingredients. It’s definitely in the Nordic style but still unique. It’s a wonderful find when you see someone working at the highest level and helping create a new national cuisine. Savoury ingredients in desserts, which I both like but consider to be often abused, were perfectly balanced here. Dishes which on paper aren’t my sort of thing - carrot treated like meat or lamb with berries were incredible. If Michelin was in Lithuania, Nineteen18 would be a shoe-in for two stars and could (really should) have a legitimate shot at three. Though I’ve yet to visit Noma I’m aware of the reasonably wide criticism that not all dishes are actually enjoyable, many break ground and are inventive but perhaps don’t always truly succeed in their own right - similar to at Mugaritz or Gaggan. There was none of that here, what was most impressive is the lack of weak or average dishes, the lowest mark I gave was an 8 and that even was for only one dish. And there are dishes that keep springing back to mind - above all the pine dessert (Jordi Roca, in my opinion the world’s best pastry chef, would have been massively proud if he’d created this) and the divine bread. Michelin’s 3 star rating is described as “exceptional cuisine that is worth a special journey“. That description is exactly relevant, I would recommend anyone travel to Lithuania even for the sole purpose of visiting Nineteen18.

Naked Trees - It’s great when a surprise menu begins with something like this as you know you’re in for an adventure. On the assumption it tastes good of course and it certainly did. It’s the branches that are edible. What’s it made from? The ingredients are dried parsley stems, malt and coffee grounds. It does actually taste delicious in a way that also reminds you of the forest.

Kohlrabi Ice Cream, Caraway Seeds - A cocoa butter filled stone. So stone-like that I first picked up the wrong one. The kohlrabi ice cream inside was just the right mix of vegetable and sweet and the caraway seeds enlivened it further

Dried Mushrooms, Truffle Emulsion - It tastes as good as you’d expect it to once you hear the ingredients. The mushroom on top has been dried and rehydrated and there’s a layer of the truffle emulsion, with dried mushroom on the bottom. Inside are lemon verbena leaves, which taste so different in this context that I didn’t recognise them

Smoked, Rehydrated, Fermented Plum, Fragrant Herbs - The plums have had everything done to them including freeze-drying at the start. They’re combined with a plum reduction and a wonderful black garlic caramel that is luxuriantly sticky. They’ve also been smoked with fir needles. There’s no shortage of flavour

Osciatra Caviar, Roasted Barley Milk, Plum Kernels - Out comes a heavyweight ingredient, this is very fine caviar intended to be matched with Lithuanian ingredients, which are roasted barley milk, which has had a little kelp added and which nicely sits slightly in the background not detracting from the caviar but providing some nice balance, and brilliantly some plum kernel oil, which really takes the caviar somewhere new and feels like such a natural match

Pickled Turnip, Fragrant Herbs, Horseradish Buttermilk - It’s always a lot easier to make a great dish from caviar but how about from kohlrabi?

Sourdough Rye Bread, Caraway Seeds, Brown Butter - I actually dream about this bread. Probably the best I have ever tasted. They bring it out to show you before it hits the oven and you see it’s a rye recipe with caraway seeds on top and with the dough wrapped in kale leaves. The kale leaves have a wonderful impact, when you pull the bread apart you eat the kale with it and it really elevates the flavour. The rye is light in texture and rich in flavour, courtesy of some wonderful honey. It is served with a caramelised butter and some sea salt. It’s quite something when you have an incredible meal and the bread is close to the best thing you tasted.

Jerusalem Artichoke, Black Rosehip Berry, Bee Pollen - I’ve seen dishes like this before where the rim is a little bit gimmicky - not here. A lot of flavour in the liquid and the sweet rim works perfectly

Charred Carrot, Carrot And Cider Reduction - Ok so this isn’t the most exciting dish - it’s carrot treated like it’s meat. Well actually it is really exciting - the carrot is as tender as a piece of meat and I was blown away by the pine cones on top which had such wonderful flavour and such a smooth texture. A carrot dish with no compromise at all on flavour. The cider reduction is also a star

Lamb Belly, Fermented Unripe Black Currants, Cucumber Reduction - The lamb belly is marinated in juniper and kelp for 24 hours then cooked for another 24 hours at 67 degrees. The cucumber component of the dish was brought to the table to show some of its preparation which is a great window into the processes they use. Would love to see this done more. There’s a combining of cucumber juice reduction with charred and smoky cucumber flesh and skin as well as both chicken and lamb stocks. Some dill vinegar is added and smoking juniper and hay is used to infuse some smokiness. The lamb is served also with preserved pine shoots and fermented unripe blackberries, which were a revelation. They taste entirely different and have a sharp punchy acidity that was amazing with the lamb. Truly memorable 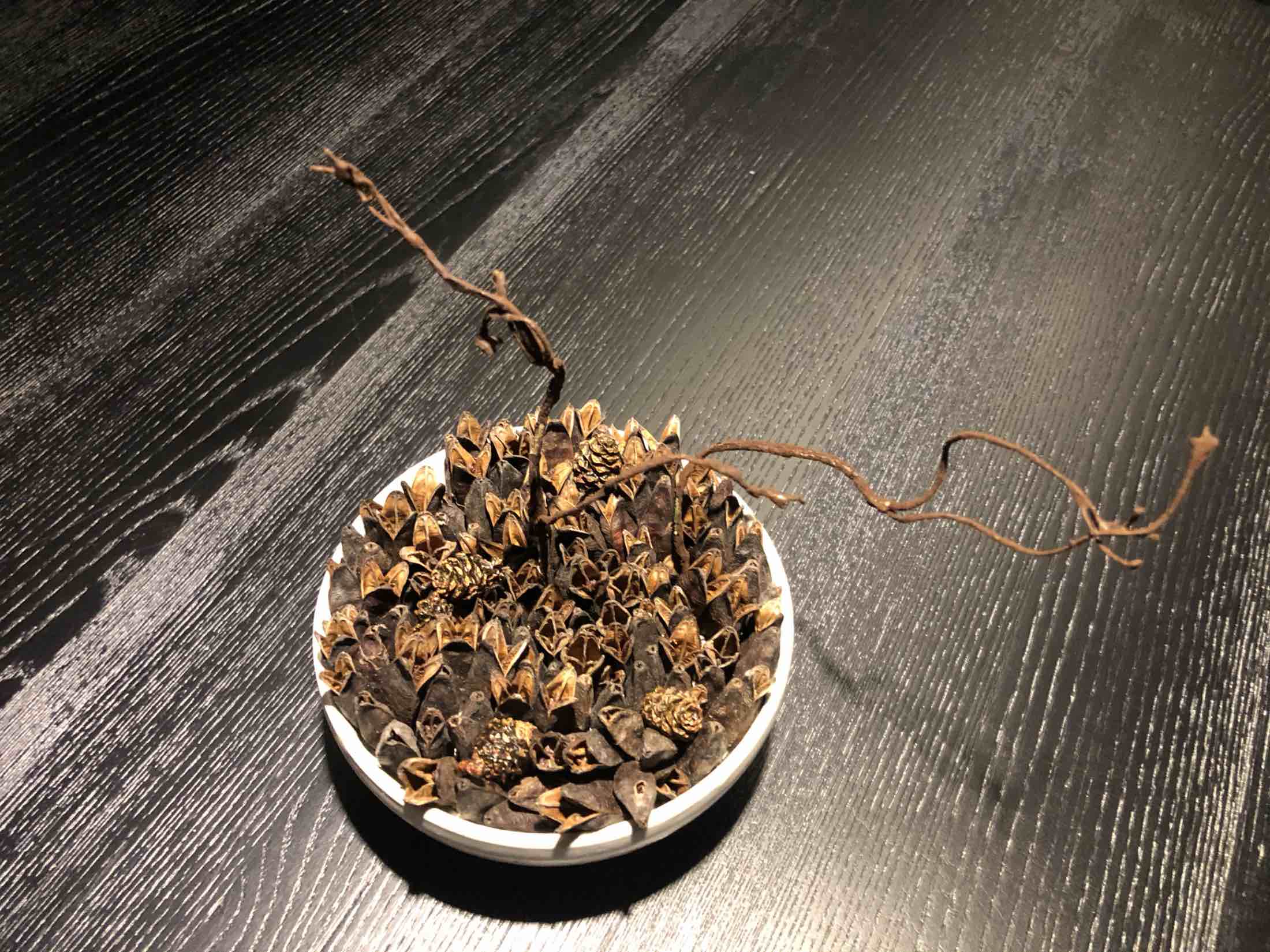 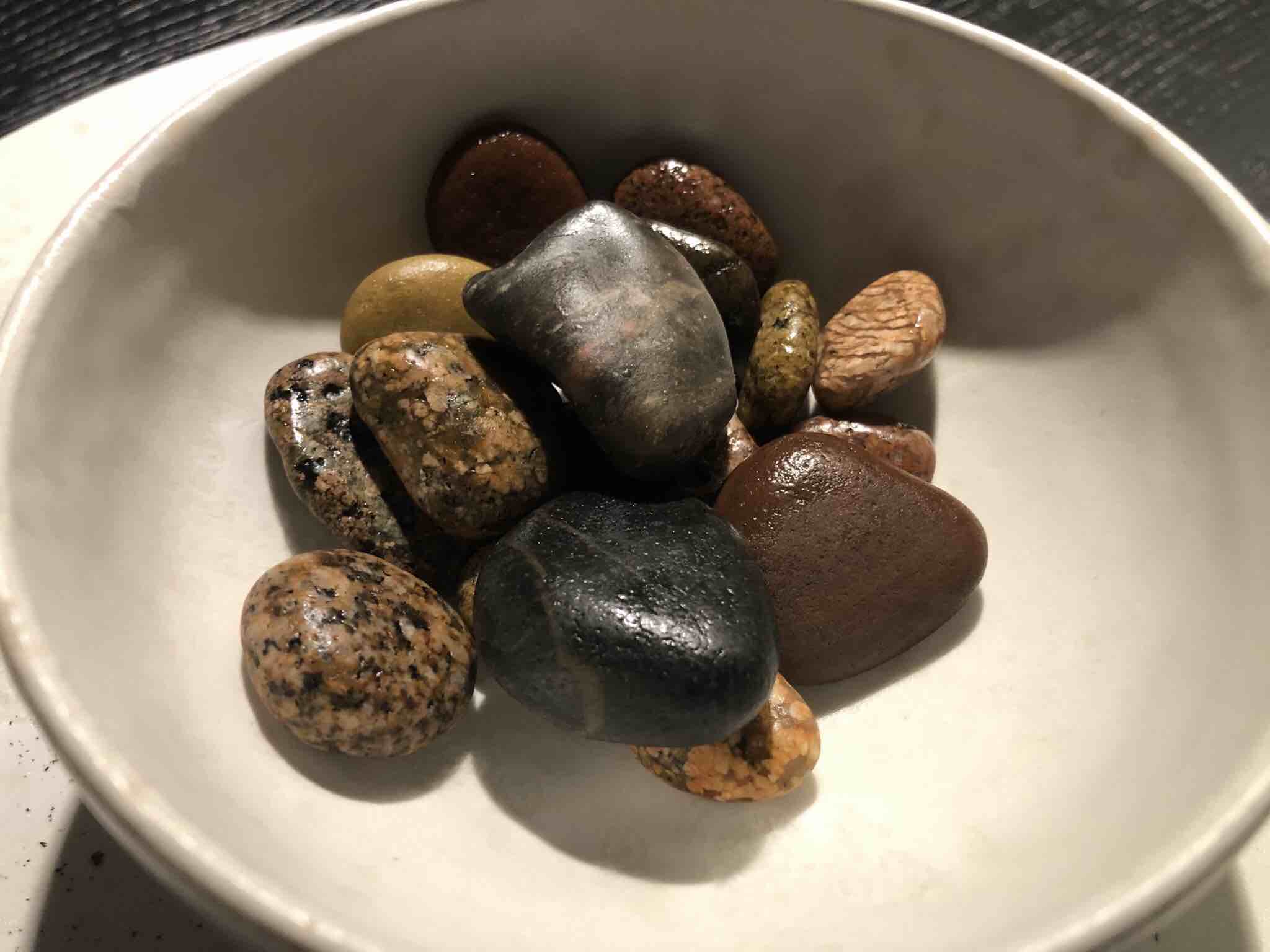 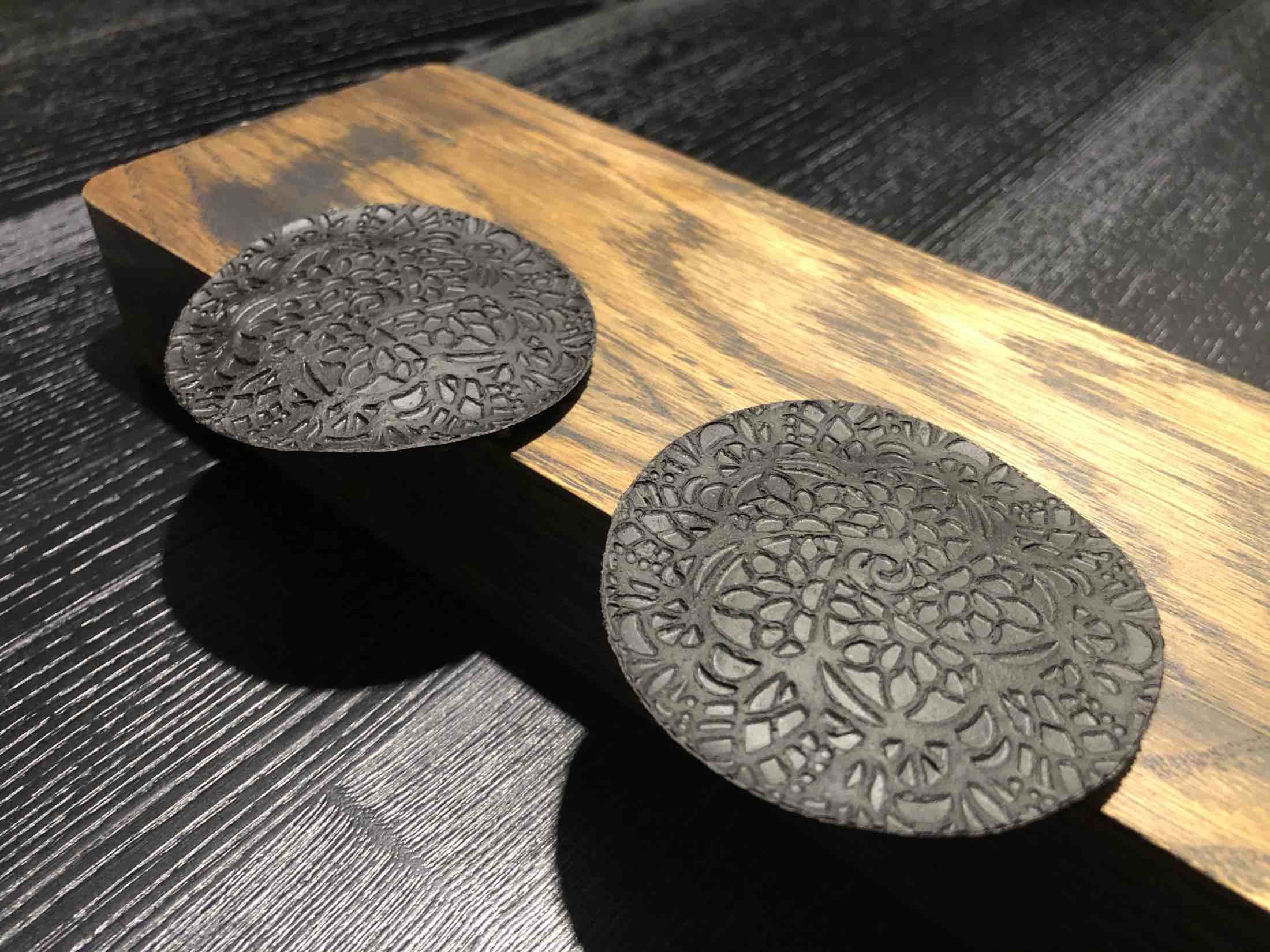 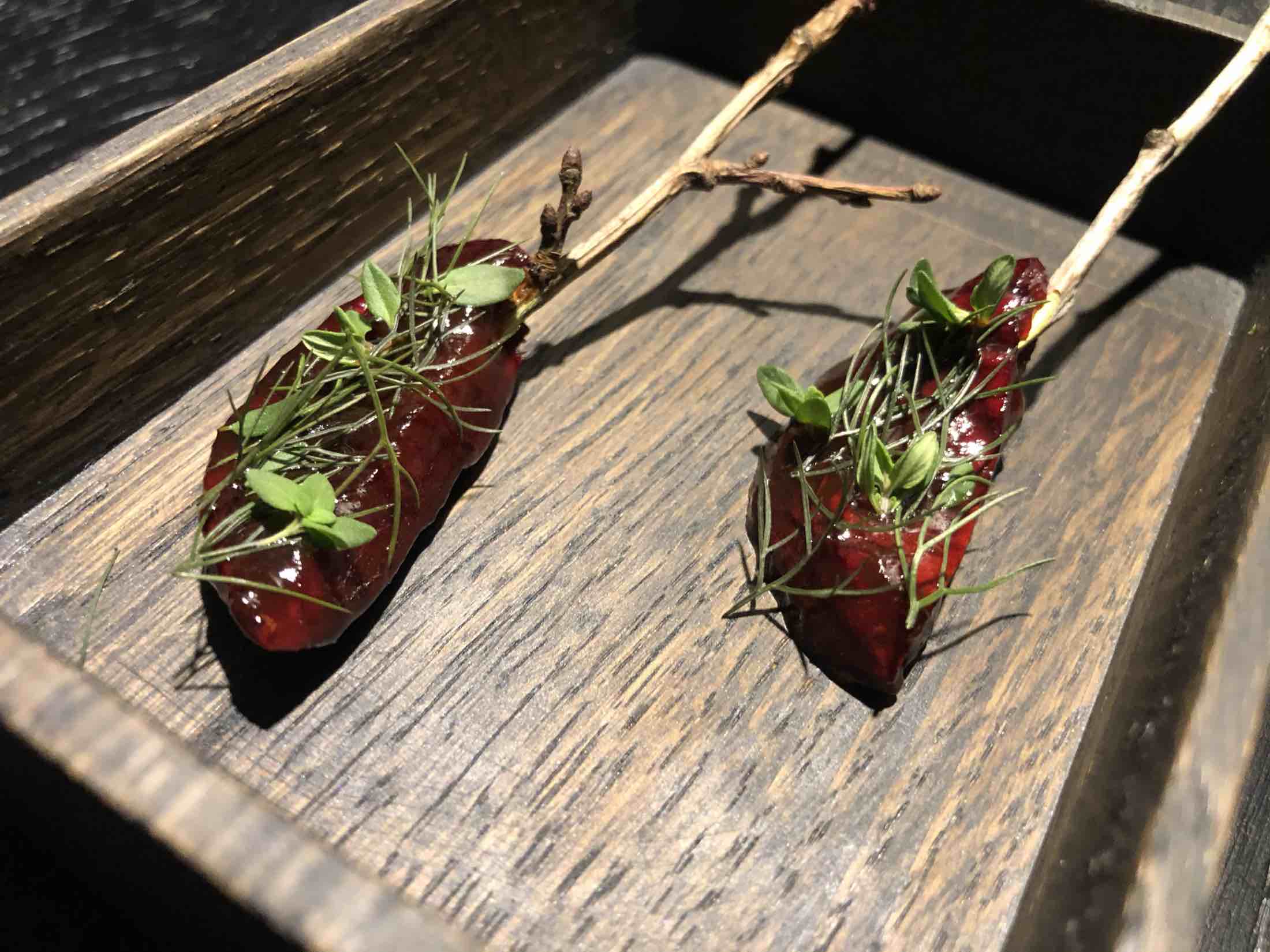 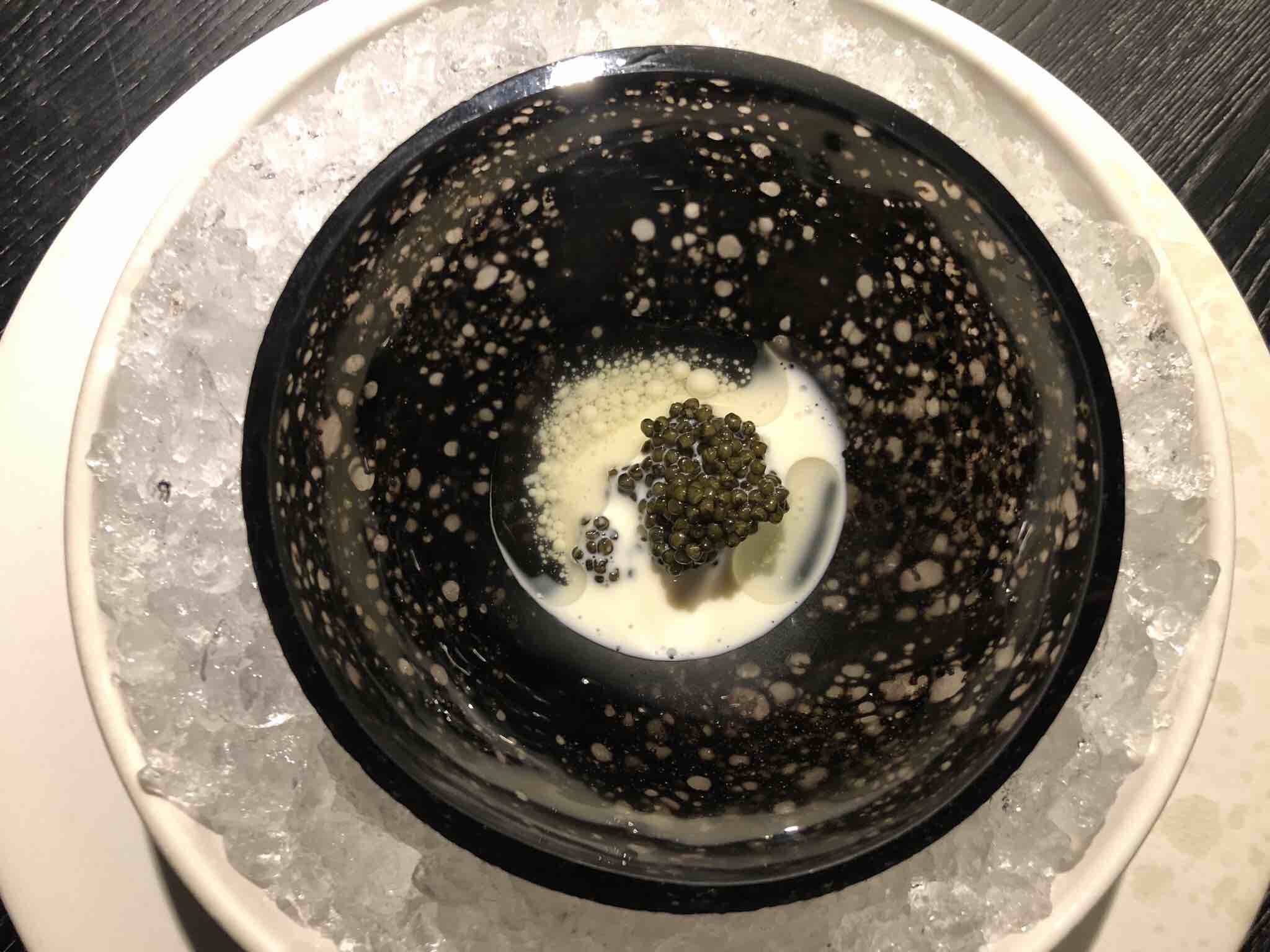 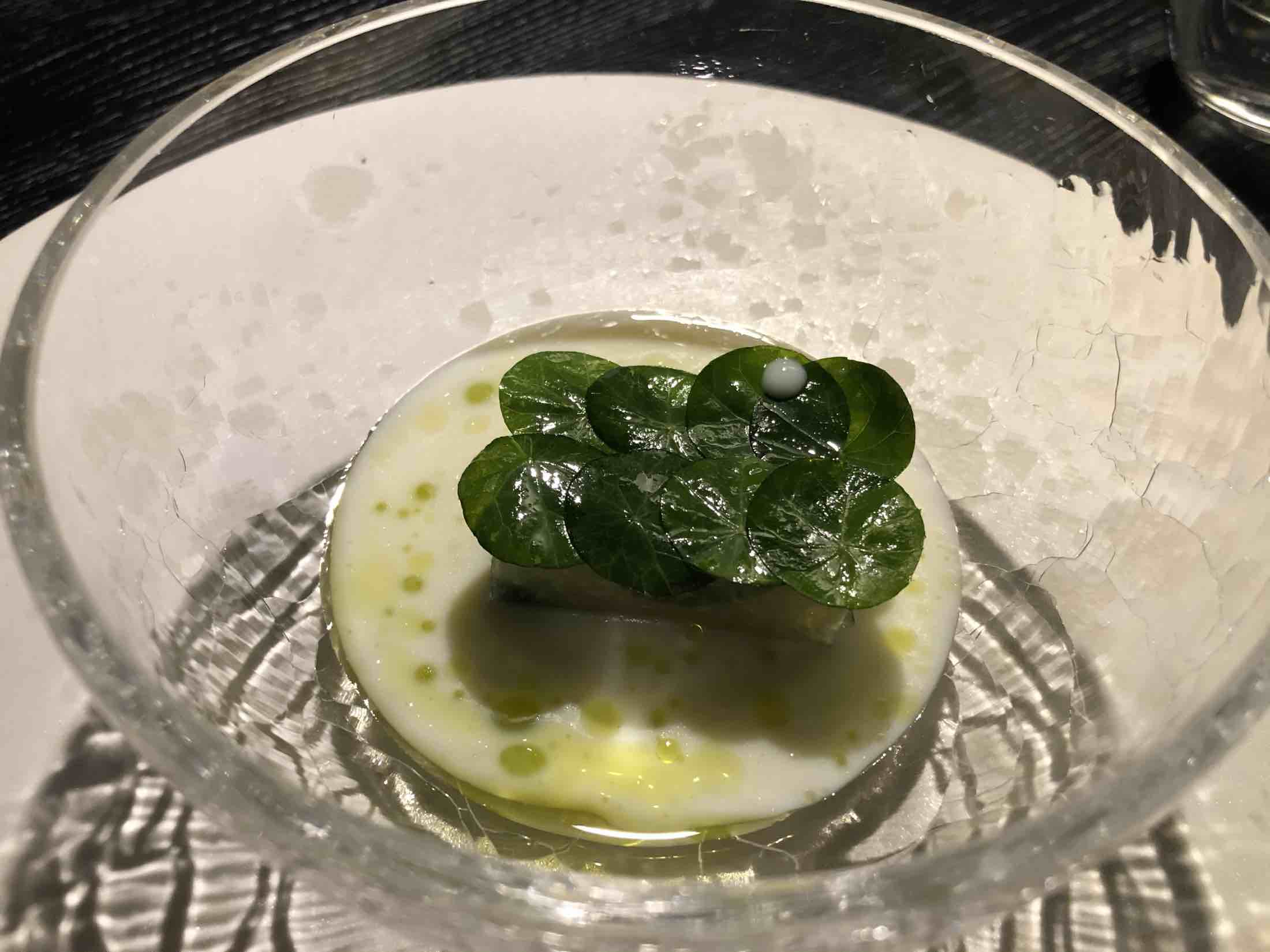 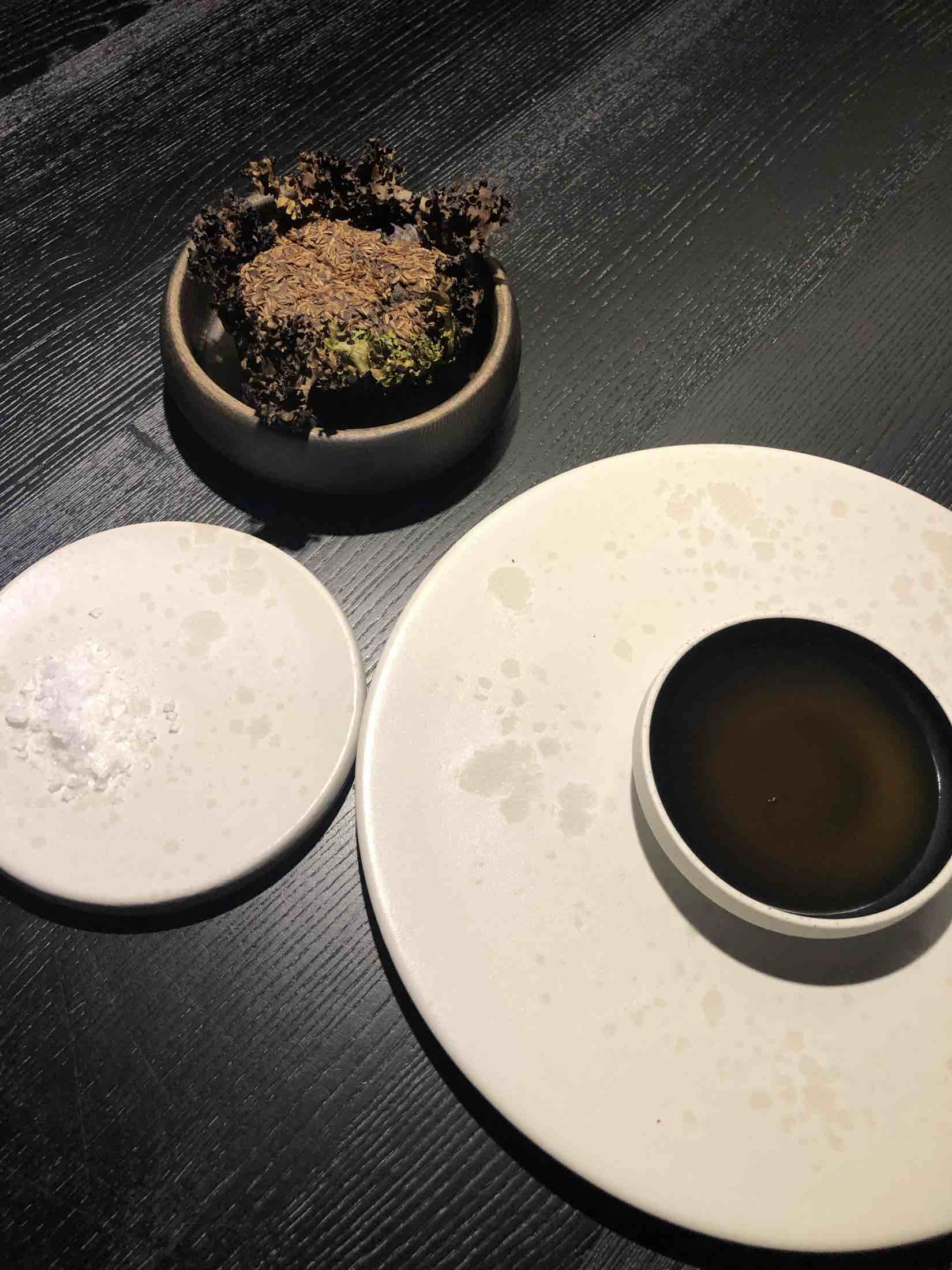 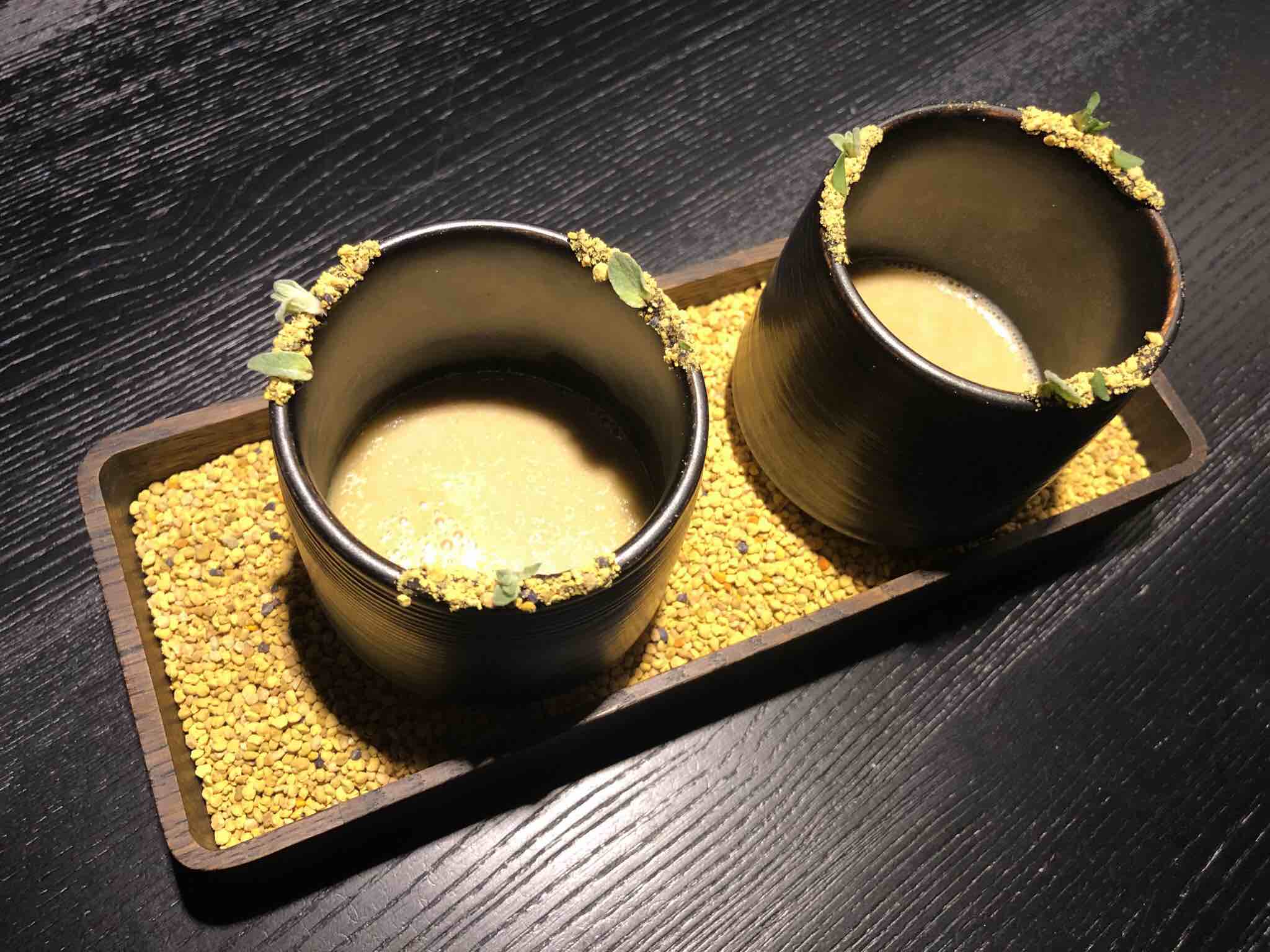 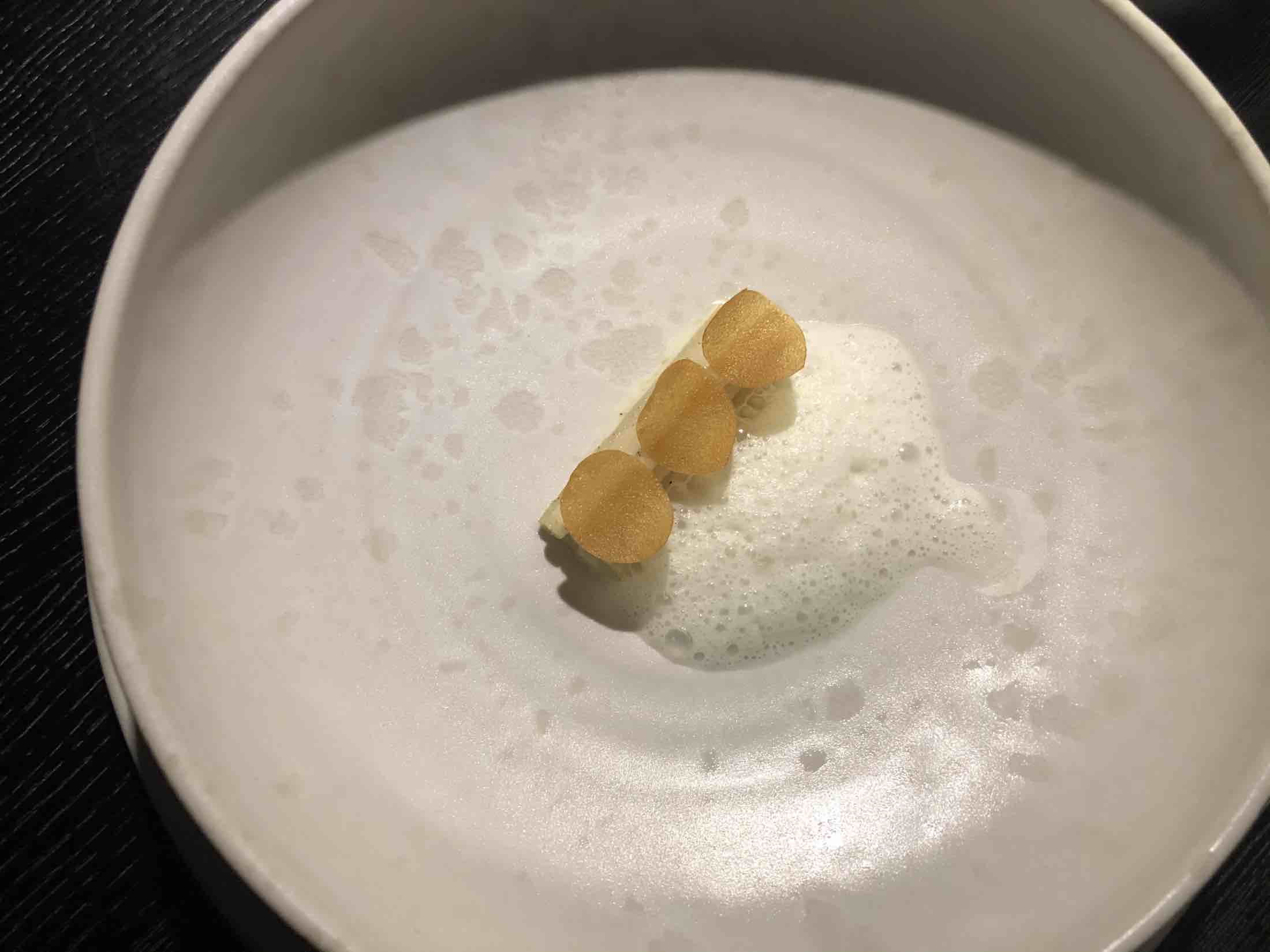 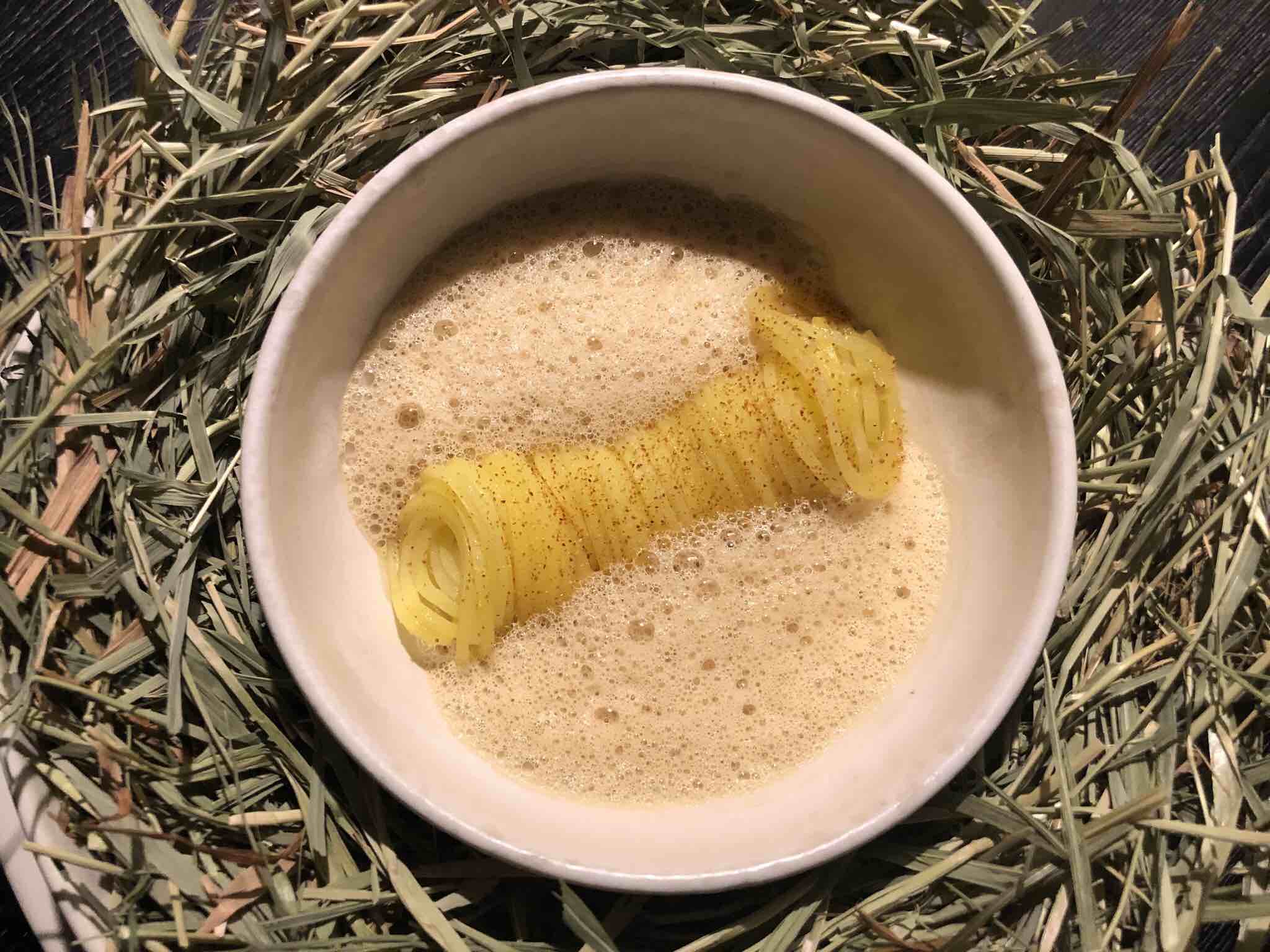 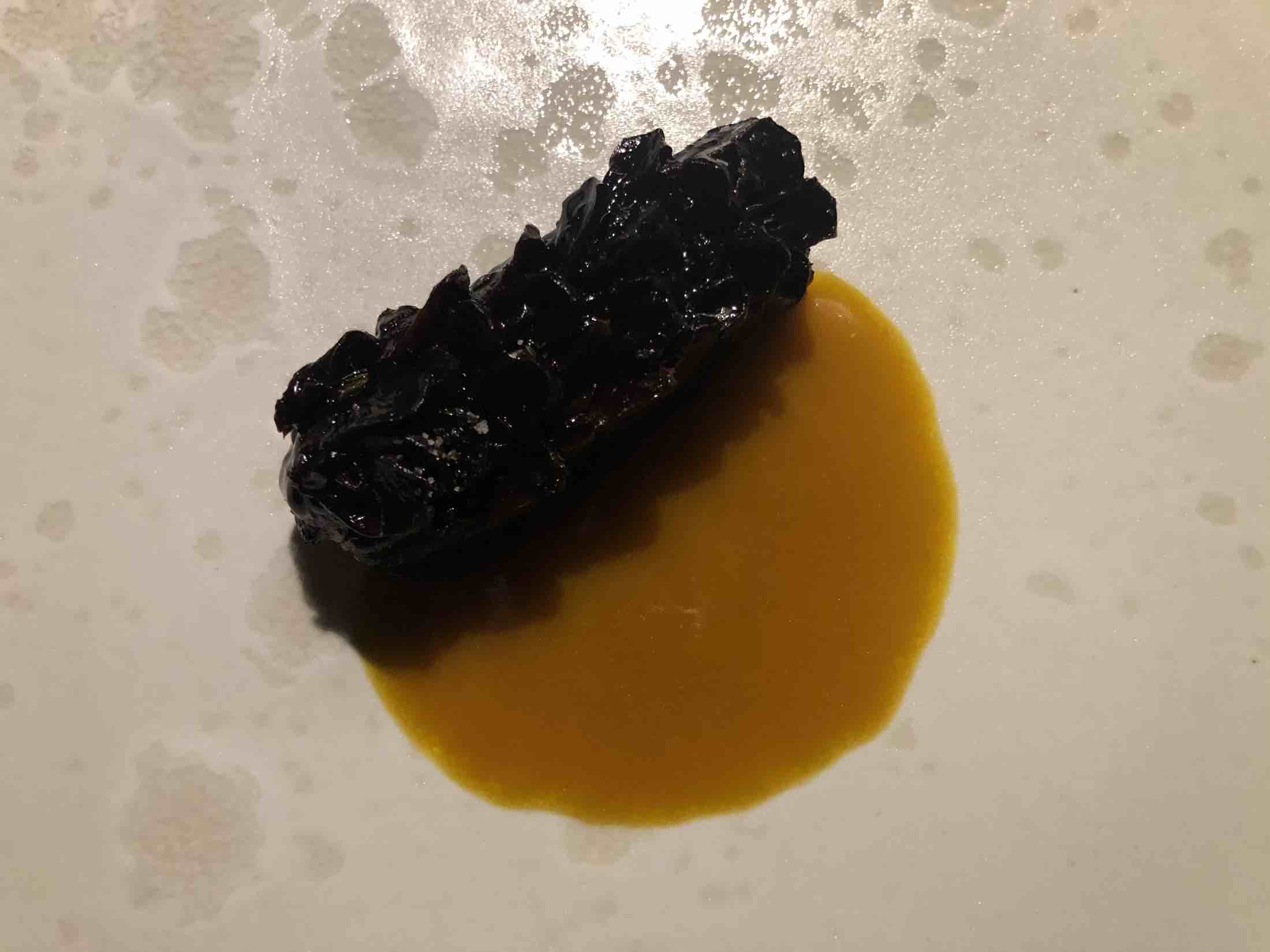 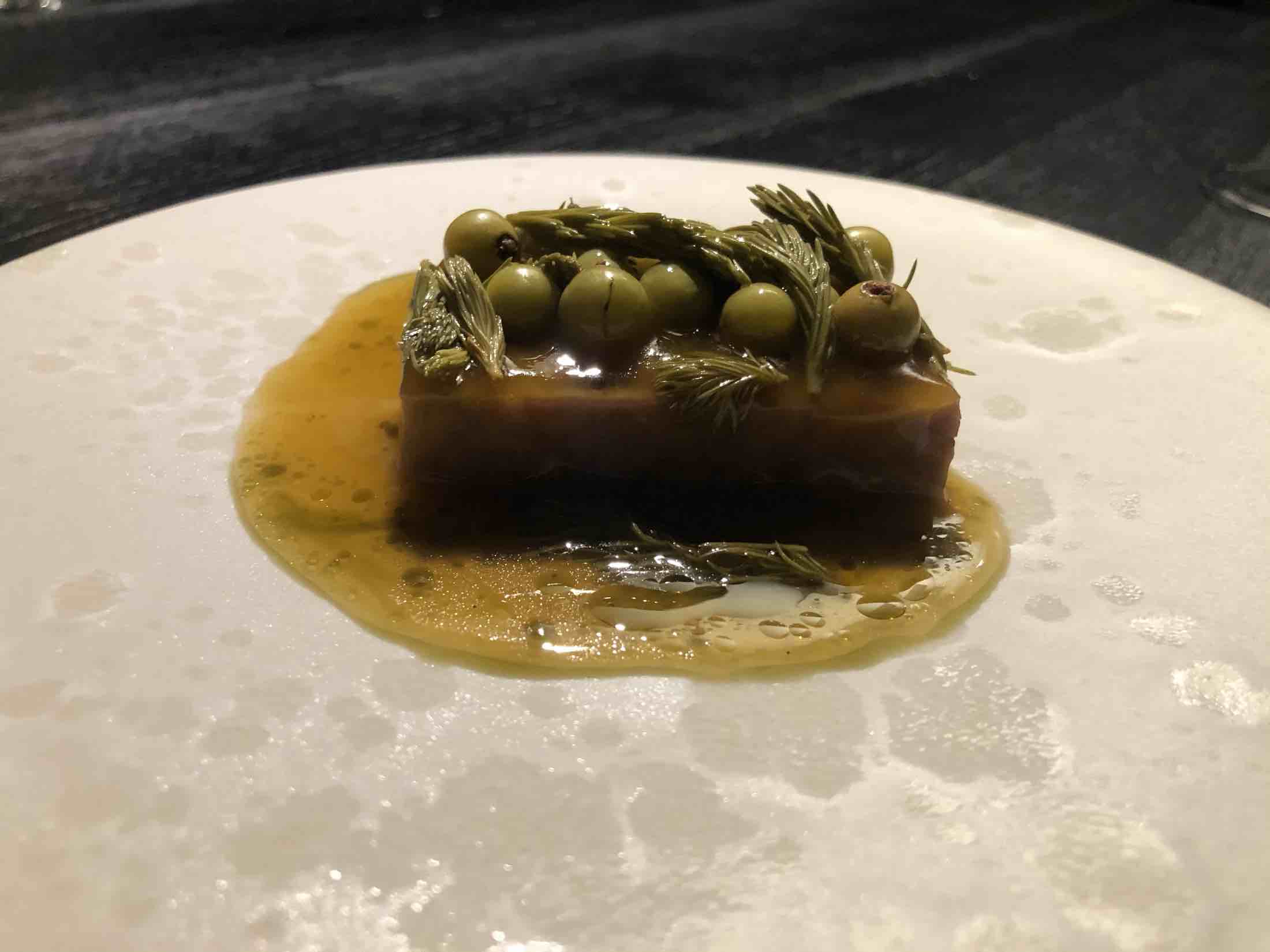 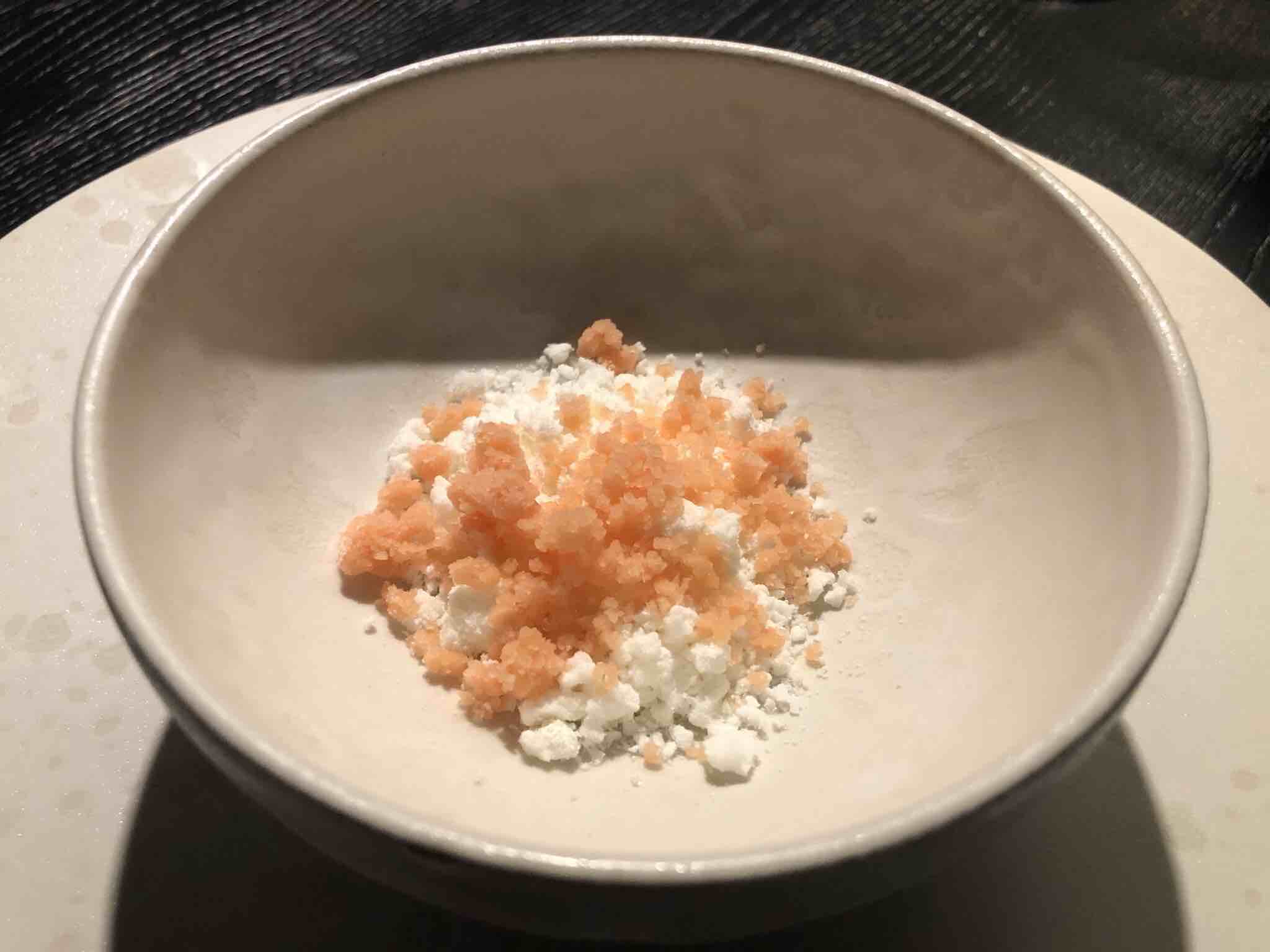 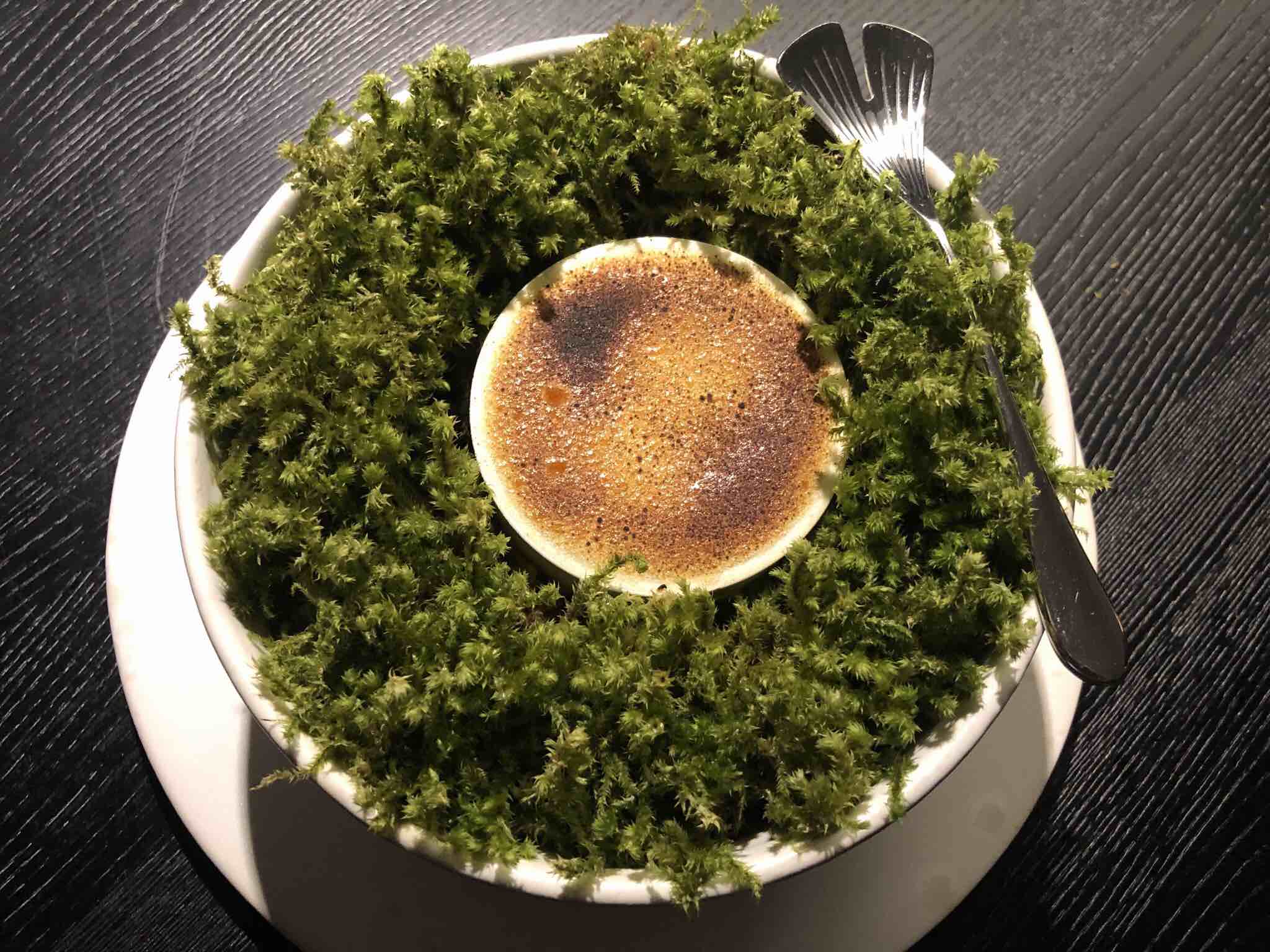 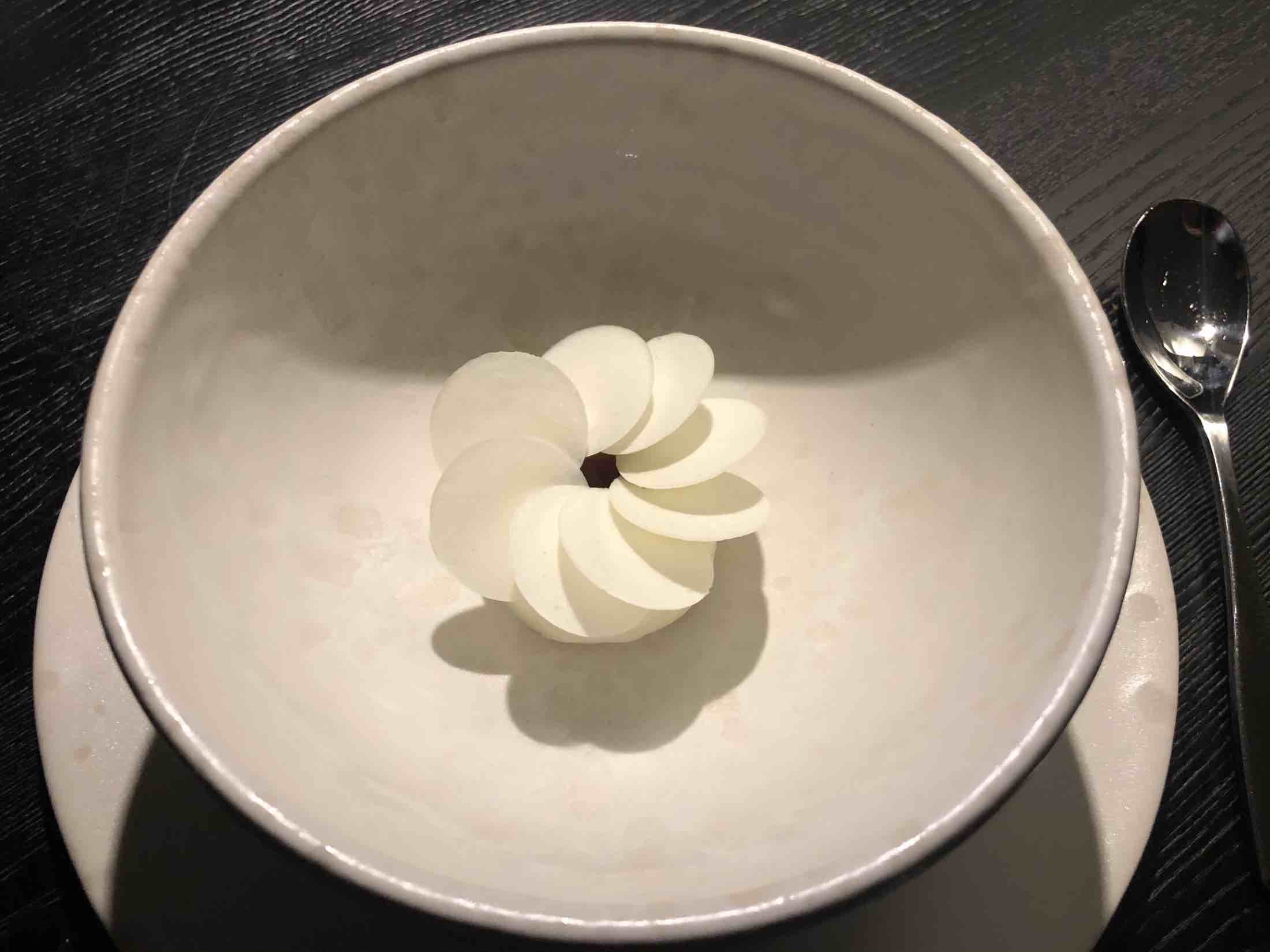 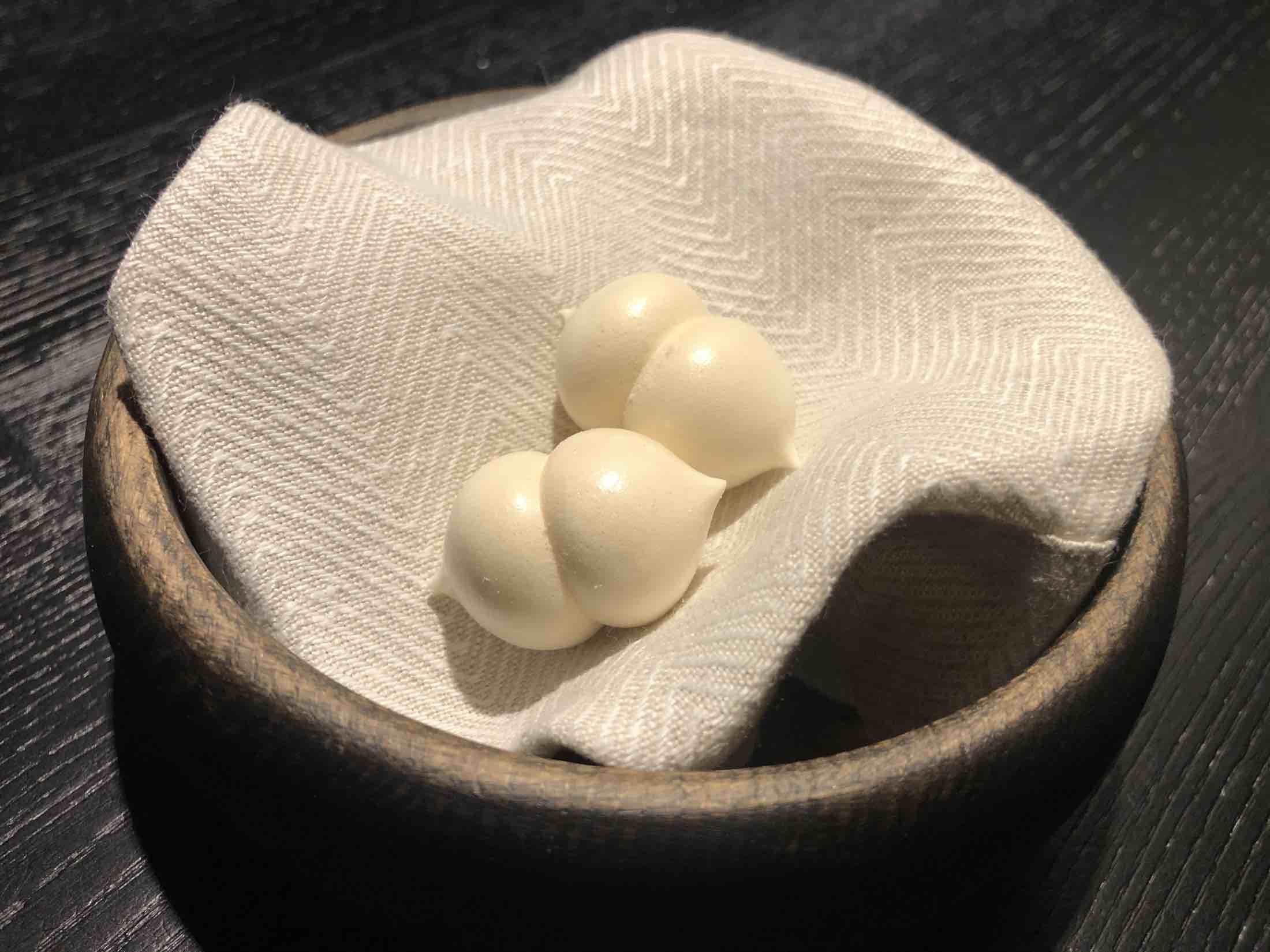